If you have ever seen a human disaster on the news you can surely bet that a Cadaver dog had a role in the response.  Cadaver dogs have supported us in so many ways that we may not even know so we decided to highlight them along with the many other dogs that are supporting us in our Amazing Dogs Series.

Table of Contents hide
1 What is a Cadaver Dog?
2 How accurate are cadaver dogs?
3 Cadaver Dog Facts
4 What Dog Breeds Are Cadaver Dogs?
4.1 What Do Cadaver Dogs Smell?
5 Final thoughts
5.1 Check out more in our Amazing Dogs Series. Dogs that inspire us:

What is a Cadaver Dog?

Cadaver dogs are taught to perform their task by being exposed to many kinds and stages of decomposition during  training. These training aids include human bone, blood, tissue, used gauze, liposuction material, teeth, and even pseudo-scent.

How accurate are cadaver dogs?

In most cases, cadaver dogs are 95% accurate.  Researchers are learning ever more about the canine olfactory system, including what volatile organic compounds in human remains are significant to trained dogs, what concentration of human remains a trained dog can detect and what conditions are optimum for the preservation of smells.  Added to that, a dog’s talent and utility depend on the skill of its handler.

Cadaver dogs are able to scan a large area of ground very quickly and find human remains with very high accuracy. These four-legged detectives can cover around 1.3 km daily, making them a huge asset to response teams in water and on land.

Amazingly, they can also distinguish between human remains and other animal remains in their search and they certainly will not flag anything living 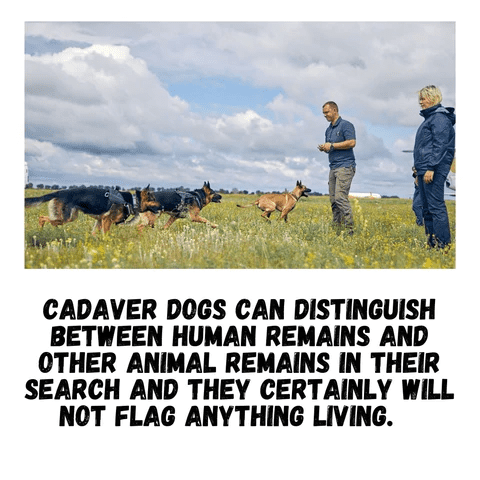 Cadaver dogs play an important part in resolving many missing or deceased persons cases and providing closure and justice to grieving families.

Here are some amazing facts about these extraordinary canines.

As we discuss in our other articles on amazing dogs, including What Are Scent Detection Dogs Used For and Can Dogs Smell Cancer in Humans, The Latest Research, Dogs’ have an amazing sense of smell: Dogs have smell receptors 10,000 times more accurate than us. This means their nose can detect substances at concentrations of one part per trillion.

What Dog Breeds Are Cadaver Dogs?

There is no specific cadaver dog breed that is used.  Dogs need to be smart, trainable, and willing to please.

The most common cadaver dog breeds are

Cadaver dogs are chosen for their amazing sense of smell and other traits rather than choosing based on breed alone.

The best cadaver canines are the ones with a keen sense of smell, good hunt drive, high working drive, intelligence, confidence, determination, and strong nerves.

What Do Cadaver Dogs Smell?

Possible scents that Cadaver dogs smell include two byproducts of decomposition: putrescine and cadaverine.  Even though these compounds are common to all decaying material, a well trained cadaver dog has such fine-tuned senses, it can differentiate between putrescine and cadaverine from human remains and  most animals’.   Additionally, Belgian researchers also isolated a compound, dimethyl sulfide, that trained dogs detect and accompanies putrefaction in many kinds of organic matter, including human.

Cadaver dogs use these compounds to locate bodies in nearly all recent disasters including the devastating fires in Colorado, major destructive hurricanes, including hurricane Katrina, important missing persons cases, where evidence from cadaver dogs has been deemed admissible in court, and the burial sites of mass executions, dating from World War II through the conflicts in the Balkans in the 1990s, and cadaver dogs have been used to help archeologists find truly ancient burials.

Cadaver dogs can face amazing challenges like the recent fires in Colorado, where post fire they sifted through blazes that were later covered with 8 inches of snow or in many hurricanes and tornadoes where they not only have to sft through debris and rubble but water and flood in extremely difficult conditions. 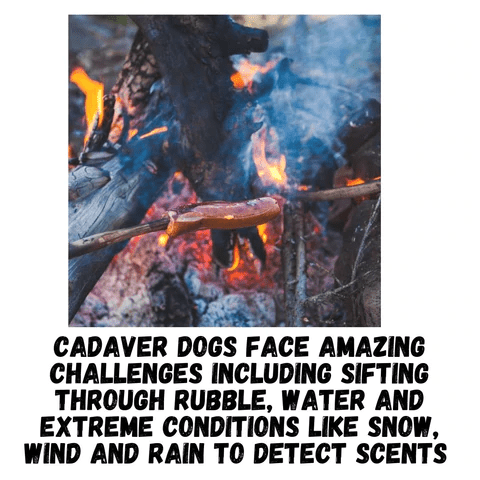 Do you think your dog has what it takes to be a Cadaver Dog?

Further resources:  The Cadaver Dog Handbook is thought to be one of the ultimate resources for training a cadaver dog.

Check out more in our Amazing Dogs Series.  Dogs that inspire us: