As a dog lover you likely know of Coachella or La Quinta for the annual dog show held at the exact same location as the Coachella Music Festival but this year dog lovers got a surprise at the Coachella music festival.  Dog lovers were  were graced with the wonderful dog art installations created by Oana Stănescu.

As I meandered around Coachella it came as no surprise to me to find one of the famous art installations of dogs.  Dogs have had a long history of showing up in art.  Just last week I read a wonderful article about the many dogs of Picasso in Modern Dog Magazine entitled the Picasso’s Dog’s.

It was fun and again not too surprising to learn that Picasso was a huge dog lover and placed many dogs in his paintings when he needed to add interest.

Dog’s in Art Throughout History

Starting in B.C. dogs appeared in art on caves and then later in the Renaissance dogs appeared in art as companions or as working dogs out hunting.  I always recall as child the many antique fox hunting paintings and tapestry’s throughout our home where hounds always appeared and finally in 1894 dogs showed in a piece of art we will all recall, the iconic Dog’s Playing Poker print. 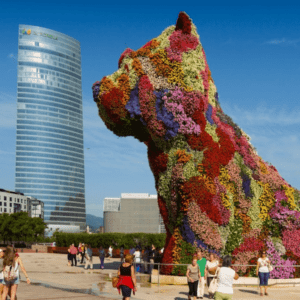 Dog’s have been in art forever.  Some may recall the large Balloon Dog of Jeff Koons or the 41 Foot high dog covered in what appeared like flowers.  Dogs are everywhere in art and outside of it.

Thus, it was no surprise to find dogs, the most popular pet in America, as the feature of an art installation at Coachella 2022, a fact I have been meaning to write and post about.  It was fun to see dogs and the happy scene they became a part of and added to and of course, the welcome shade they created.

Mutts by Oana Stănescu at Coachella

As Cultured Magazine reported, Artist Oana Stănescu believes we can learn a lot from dogs, they offer us joy, lust for life, loyalty, unconditional affection and an endless capacity for love.

The New York–based Romanian architect created massive canine sculptures to bring a bit of this love to the desert. Each steel sculpture is covered in live plants, which bring a sense of home and comfort to a lawn filled with thousands of strangers. Plants like lantana (red, yellow, purple), cassia, fountain grass, yellow bell, jasmine make up their shaggy forms and add depth to the sculptures while creating a shaded place for gathering. 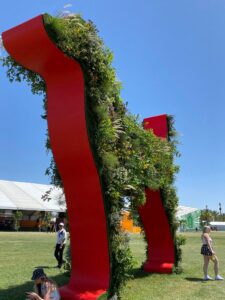 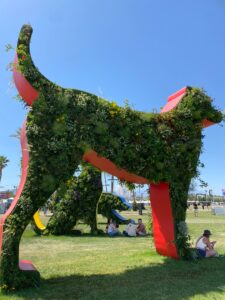 The description of Mutts noted that each dog was in a typical position, creating a dialogue and inviting interaction.  You can touch the nose of the stretching dog (downward dog and say to yourself ohh “big stretch”), walk under the pointer, and rest on the paws of the sitting dog.  The striking silhouettes reduce the dogs to their minimal forms, allowing their expressions to speak through their contours and gestures. 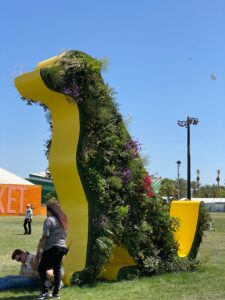 The description of Mutts  went on to say that the plants add shagginess to the sculptures while creating a place of gathering.  The installation is reusable and recyclable which is great news as many of the installations later appear around the local cities. 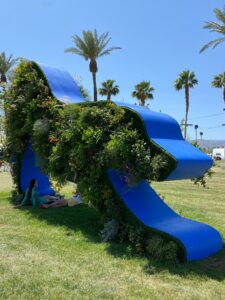 Next time you are out and about note any dog art that you consider and see how it adds to everyone’s enjoyment and follows a long history of dogs in art throughout the world whether famous dogs in the cinema, those we follow on social media for entertainment dog’s are enriching our lives in more ways that we even know sometimes.