What is a Conservation Detection Dog? (Plus How You Can Support their Amazing Efforts)

Every day conservation canines are working on the front lines as a true working dog and performing importance conservation work helping scientists around the world understand and protect wildlife at risk.

What is a Conservation Detection Dog?

Conservation detection dogs are dogs that lend their paws and noses to fixing some of the most complex environmental problems that we have imposed on the planet. They fight invasive species, invasive plants and animals, that people have introduced to new environments. Conservation dogs fight poaching and trafficking of endangered species like rhinoceros and elephants.

Conservation dogs also help their dog-handler teams find evidence of the negative impacts of human activities on the environment by retrieving carcasses of birds and bats that have been hit by wind turbines. Facilitating the greater study of how best to protect these species at the same time as performing the human activities which may be conservation efforts in and of themselves like wind turbines but still have an impact on other animals.

Conservation dogs also work hard to stop transnational criminal organizations that sell endangered species and illegal timber or other natural resources across borders and poach animals and destroy the environment to do so.

One of my favorite stories is of a conservation dog team that finds sea turtle nests so they can be protected from predators and people to ensure the small babies make it to the sea when they are born.

Conservation dogs are a broad group of dogs doing diverse activities. Some are deployed by environmental groups and conservation groups but more and more government agencies are deploying dogs similar to National Portuguese Environmental Police.

They found the usefulness of dogs detecting poison in fields that were killing birds. The Law Enforcement team only made this discovery and acquired their own conservation dogs after environmental groups deployed the dogs to work on important conservation biology projects.

Conservation dogs work in all climates from hot sierra mountains in summer finding bees to sniffing out polar bear dens under the snow near areas being explored for gas development and identify the presence of harmful chemicals such as PCBs in urban areas.

Conservation dogs give human handlers important information they need to protect wildlife in conjunction with wildlife service teams or individuals.

Conservation dogs like livestock guardian dogs have a double coat or at least long hair so that they can adjust to many different climate types.

What is the most fascinating with this type of work is the vast variety of dog types, breeds and breed characteristics that are used in conservation work the variety is about as vast as the conservation dog handler types that train them.

Dog breeds we have seen doing field work include purebred dogs like the Great Pyrenees, Kangal Shepherd, various Spanish and Portuguese Mastiffs that are supporting farmers around the world living harmoniously with their environment by keeping livestock safe and predators at bay.

What was interesting when it came to other wildlife detection or scat detection dogs working on other conservation projects they were mostly not purebred dogs but rather high-energy dogs that had incredible drive to work and focus. Many were found by conservation groups in animal shelters. These high energy dogs often did not fit into a family due to their incredible drive and energy levels but find their place working in conservation.

You can see the varied breeds and types of dogs working in conservation at Working Dogs for Conservation “our dogs” section. 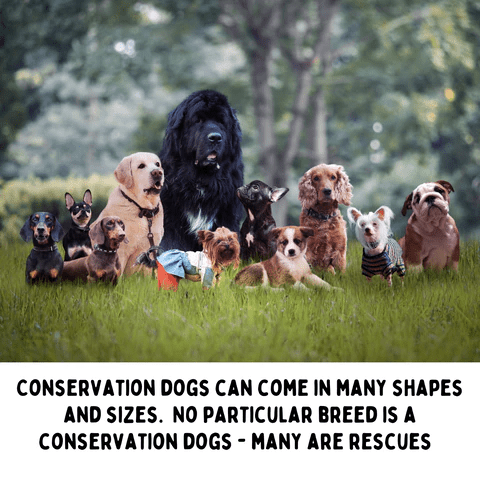 How You Can Help Conservation Efforts with Dogs

Dogs may also have to work with live animals which is another costly and cumbersome endeavor. Working Dogs for Conservation seeks many forms of donations to pay for the costs of raising, training, feeding and keeping conservation dogs and deploying them to work. They also have a store where profits from purchasers support their program. By donating to their efforts you are donating to conservation efforts.

You may also be able to help by training your own individual dog. The fun thing about conservation dogs is that any breed and variety can perform important conservation functions and it may be your very own.

Citizen scientists from all over the globe train their own dogs to support conservation efforts. The Conservation K9 Camp provides expert training in scent detection, dog handling and environmental management for ecologists and citizen scientists interested in the use of dogs for conservation. They have a three day course that can get you started.

However, even prior to that it may be fun simply to test your dogs scent abilities through some games and fun. Also, a great way to connect with your dog and burn some energy. The National Association of Canine Scent Work runs the K9 Nose Work Program, which gives dogs and people a fun way to learn these new skills. Whether a you have a purebred or a one or many rescue dogs they all may take to scent work and have the skills it takes to be a conservation detection dog.

Read more about Amazing Dogs that Inspire us: